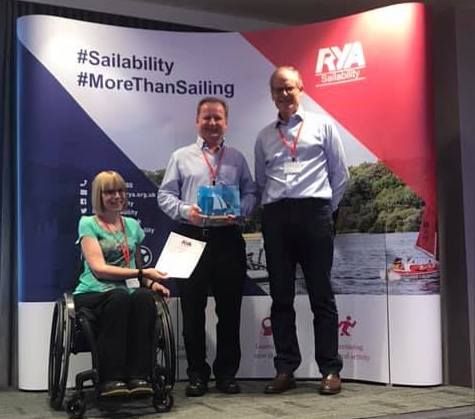 This year's 2019 RYA Sailability Annual Awards were presented at the Sailability National Conference and Awards dinner at Wyboston Lakes (Saturday 16 February), attended by over 55 Sailability sites from across the UK, including Redesmere's own inspirational example, Gary Lowe.

The Exceptional Contribution Award is presented each year to an individual(s) who, over a considerable period have shown exceptional commitment and dedication to boating and getting people on the water; a description that does not begin to touch Gary's own personal commitment and dedication, both regionally and nationally, to enabling physically, mentally or sight impaired sailors enjoy time on the water.

In the words of two of Redesmere's own impaired sailors:

“Put simply, Gary is the reason I have returned to sailing. He is incredibly humble about what he does and absolutely deserves all/any recognition for his generosity."

“Looking back, we would never have believed... ...would be able to sail a range of dinghies on her own... It's only Gary's selfless generosity and time over a number of years that have given her the opportunity to enjoy sailing"

"Congratulations to all of this year's award winners. The Sailability Annual Awards recognise the dedication, commitment and contribution of so many..." adding, “Why Sailability? Sailing is one of the few things that levels the playing field, it's the one thing that everyone can do. When you get in the boat it doesn't matter what's right or wrong with you, that all goes away and people can compete at the same level."